Currently not allowed to run due to knackered body so was in desperate need of a fitness hobby to stop me going stir crazy. Came up with the idea of seeing how far I would get around the world powered only by my stationary exercise bike and walking with Pokemon Go….

The creaky world tour left us in Rochester.

So on this leg of the expedition we have managed

So here we go.

First stop is to a little favourite of mine. Not been here in over 25 years – I hear you scream but you are only 21. We find a way to the Isle of Sheppey after a 28km trip. A small island just off the northern edge of Kent. My sister used to live here. Apparently the first Britain flew an aeroplane here in 1909. A few years later here I got chased into Sheerness by a gang of ducks after they decided they wanted more bread from me. Ended up taking refuge in a pub. To be polite I had to try a pint of the local brew from Shepherd Neame. To my Yorkshire palette it was a shocker.

Now let’s get some distance covered. A hard 90km get us to Dover. First thing that comes to mind now are the 350ft tall White Chalk Cliffs. 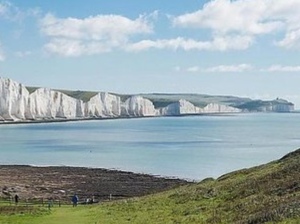 Thanks to TripAdvisor for the photo.

The Ferry Port now opens up our world tour. Passport is ready and in a blink of an eye and after another 190km we find our French destination. It’s the city of Lille. It’s a wonderful city. Great history, great art, great markets. It’s a wonderful place to eat as well. It also happens to be the home of a contender to the title of the worlds stinkiest cheese. Maroilles. It’s a tasty one.

On my first overseas holiday with my partner we had to change trains at Lille station. So excited to have left Britain behind us for a week. To completely forget our life’s for a while. Then a booming voice.

Unbelievably the guy who sat behind me at Newcastle United matches was randomly stood next to us on this faraway French Platform. He was off to Bordeaux to see his French mum. 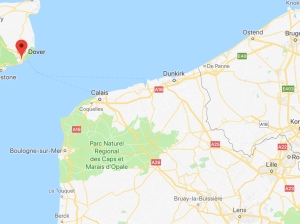