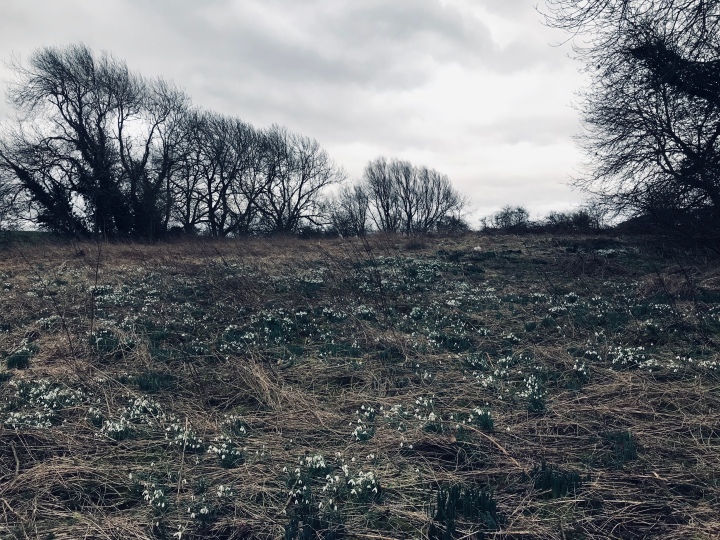 It won’t be long until the snowdrops are gone for another year. This year has been a good one for them here. My partner would be so happy. She would be less happy with our Government. All the headlines are proclaiming the new hardline stance on immigration. Basically if you don’t speak English brilliantly then don’t bother trying to work here. Not sure they have thought this one through. Basically anyone from around here speaks Yorkshire so we are buggered.

After a largely sleepless night I could feel the first signs of cabin fever building. It’s been days since I’ve been able to go for a run. So needs must. I told Son that I was going into the garden for 50 minutes. The plan was to just run around the edge of the garden – repeatedly. Round and round. It’s not a big garden so a full circuit only takes a few seconds. But it’s a run. Well it was going ok until the boredom set in. Then the irrational thoughts started. All directed at one thing. The small slope the garden is on. Every few seconds I had to run up this little slope. Yes it’s only about 15 paces of uphill grass – but every few seconds I was going up it. Pathological hatred.

Wasn’t this steep when we moved here surely..

What possessed us to buy a house on a hill..

Why haven’t we levelled the garden..

Why haven’t we put little steps in..

Because we can’t as after a couple of inches of soil you hit hill rock which is basically armour plated and brakes spades.

Fifty minutes later the run ends and the cabin fever has quickly dissipated. My irrational hatred has gone. My partner would say that if we ever won the lottery we would buy a place with parkland. If it was a big lottery win then we would also have a second home in Switzerland. Sadly my partner never got that chance to live out her lottery dream. But she did get the time to enjoy this little house on the hill. The house with the garden and that little slope. It became our source of memories. That’s actually such a cool slope. It was the little sledge sliding run for our Son when he was a toddler. It was the slope where Son played with his dinosaurs. It was where we would sit on a night and watch the sun go down with a glass of wine. So the next time I do the garden run I will remember that.