To us a sky filled with dragons.

To us the second cloud photo has a ancient mythical warrior sky surfing. That’s what we think anyway. Even can see his shoes. 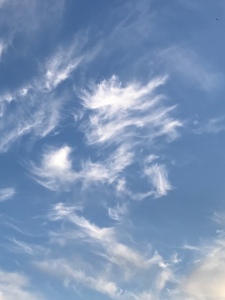 Clouding dreaming is such a great game. Well it is until someone starts to cheat.

Hawklad can you see the Transformer surfboarding.

“Oh yeh. You can see his feet as well. Actual it’s more like a warrior from say Ninjago or Power Rangers.”

“Whatever Dad. Oh look there’s a cloud that looks like a giant Pineapple with a little bit of ancient mythical warrior added.”

“Oh Dad. There’s a cloud that looks exactly like a Football Stadium with a little bit of added ancient mythical warrior added.”

Where are you looking?

“Dad look at that fantastic cloud. It looks like a giant Christmas Tree with an ancient mythical warrior sat on top.”

Where are you looking son?

“That’s the best one yet. That cloud looks like a massive castle with a moat surrounding it with a load of ancient mythical warrior manning the battlements.”

Your winding me up now aren’t you Hawklad?