A while back I started talking about my two favourite authors. The first was Carl Sagan and now it’s time for the second. Many guessed correctly.

Back in 1983 my mum bought me a book for Christmas. She would always buy me a book as a present. I had no idea who Terry was. Mum had heard him on the TV and thought maybe I would like his new book. I loved it….. He became my favourite author.

That was it. A tradition. Every new Terry book would be given to me at either Christmas or on my Birthday. She never missed a release. Apart from one. His last book. She never got round to buying that one, she would have if she had more time. 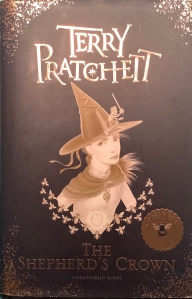 The Shepherds Crown was a tough read. Memories of mum and Terry. I decided to not read the last page. I can still say I’ve still not finished reading all his books….

Terry now has his own international day. April 28th. Let’s indulge in a bit of Pratchett wisdom a bit earlier than that.

In ancient times cats were worshipped as gods; they haven’t forgotten this.

Evil begins when you start to treat people as things.

Time is a drug. Too much of it kills you.

And what would humans be without love? RARE said Death.

If cats looked like frogs we’d realise what nasty, cruel little b*****s they are.

Always be wary of any helpful little item that weighs less than its operating manual.

The enemy isn’t men, or women, it’s bloody stupid people and no one has the right to be stupid.

So much universe and so little time.