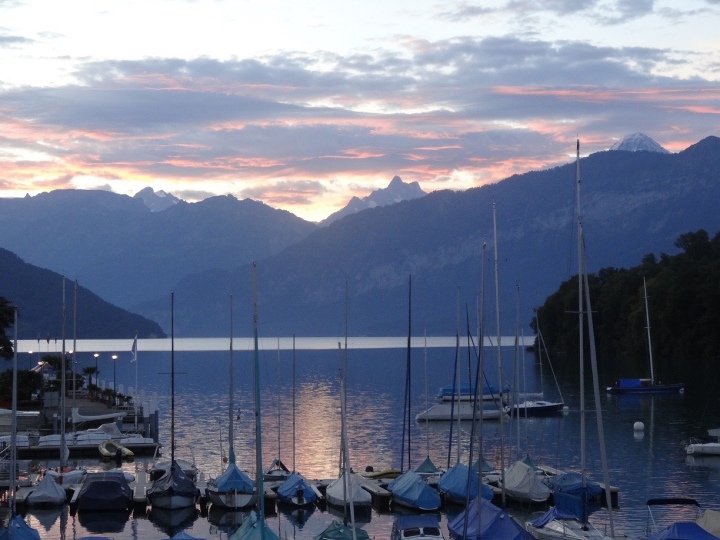 It’s Sunday so I’m in need of my weekly fix of Switzerland.

A country which is so special to me and our son. We spent many happy holidays in this beautiful country. My partners beloved dad worked with a injured soldiers charity out in Switzerland after the war. He fell in love with the country. That formed a long family bond with Switzerland. In my partners absence we will keep that candle burning bright.

I still remember that first time flying into Geneva and getting that initial glimpse of The Alps.

That first sight of a stunning alpine valley. 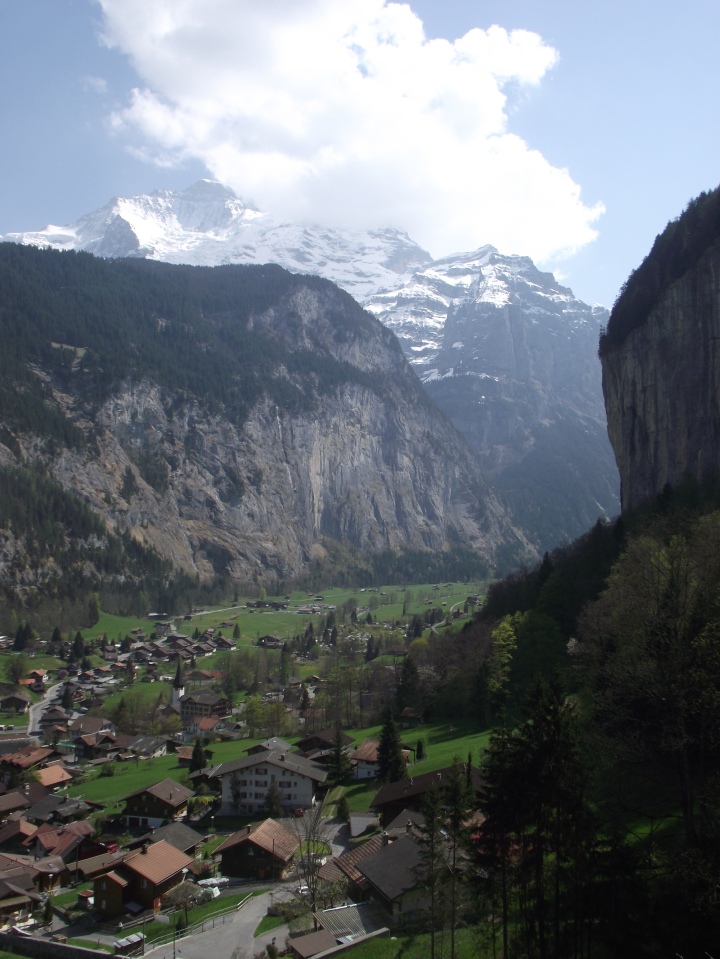 That first afternoon walking outside the hotel, hand in hand with my partner and getting my first sight of the mountain which dominates beautiful Spiez.

Those trips on the lake boats.

That first sight of The Matterhorn.

Watching the world go by on the trains while son repeatedly asked his mum to tell him the fairy story involving The Eiger, The Monch and the Jungfrau.

Watching the sun set over The Alps while son played with his animals on the hotel balcony. 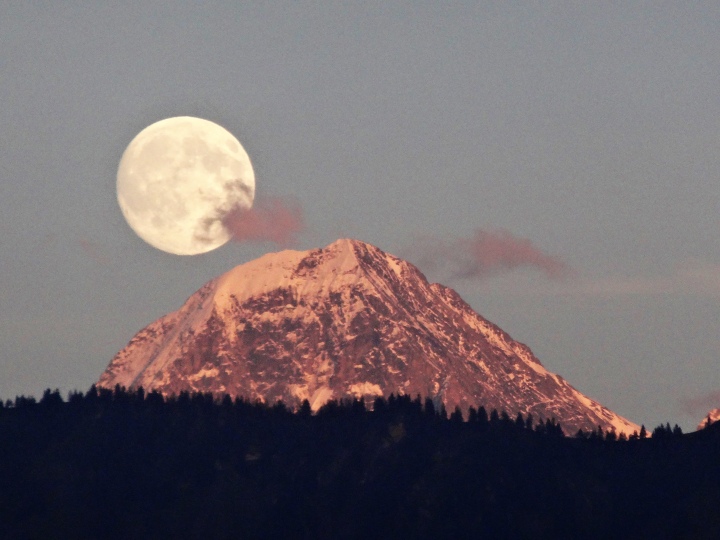 Those trips to the heights of The Alps and pointing out each famous mountain to an excited son. 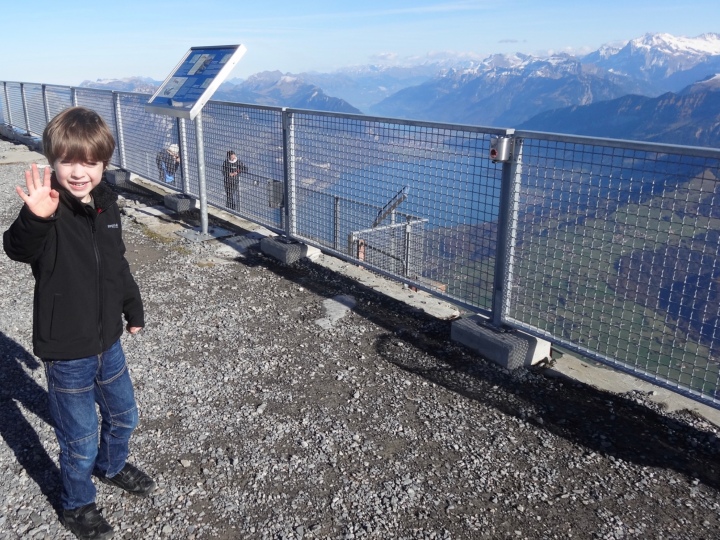 Circumstances mean that we currently can’t be there, but our hearts most definitely are. 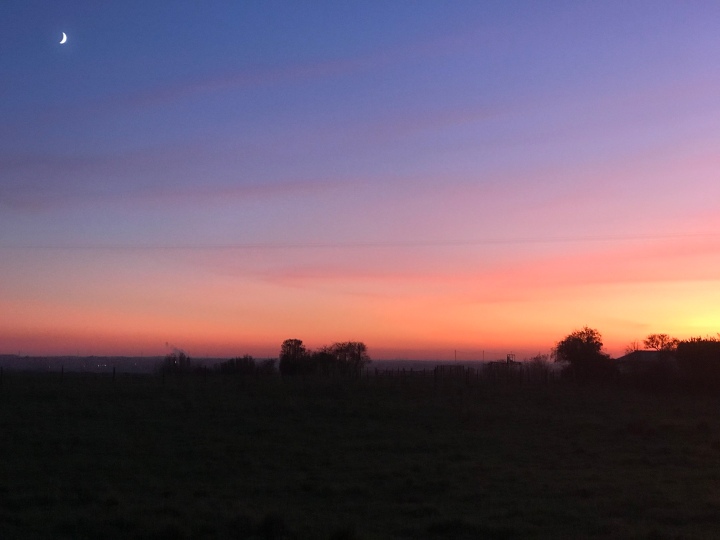 Over the last month or so sunsets have sadly been at a premium in Yorkshire.

But when they do make an appearance they are often stunning.

As grim and frustrating as a day may have been just one moment can lift the spirits. An unexpected smile, a compliment, someone showing that they care, a loving hug or in this case a brief piece of natural theatre. I really hope everyone finds at least one of those moments today. 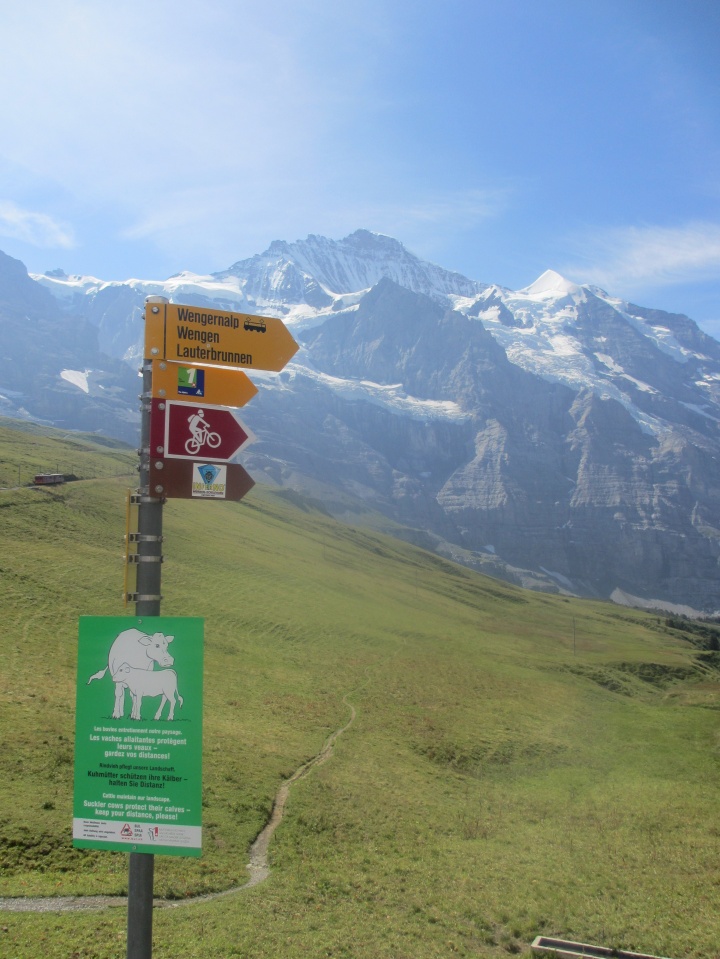 It’s time for another little bit of that wonderful country called Switzerland. For us it has so many memory gems. Every photo seems to yield another beautiful memory. 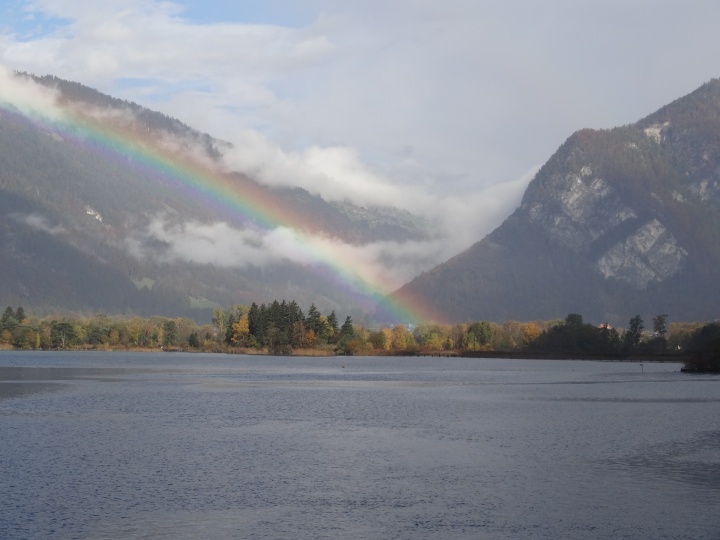 The damp Sunday morning boat trip across a Lake. All the passengers are outside in the drizzle just enjoying rainbows across the water. 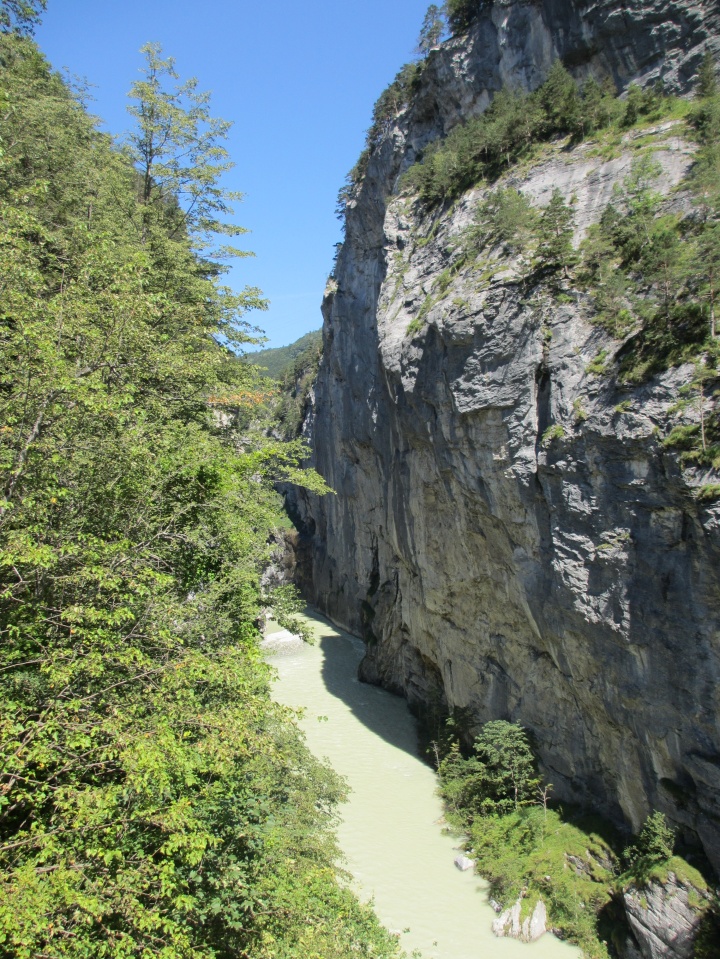 The Gorge walk with the milky river.

The walk round a vineyard with views to die for.

The late evening stroll around the Lake and as the sun starts to set the mountains come alive.

The early morning coffee sat watching the sun rise above the Alps.

And we can’t leave out the cows and the hypnotic sound of the bells. Switzerland is one of the most precious gems of them all. 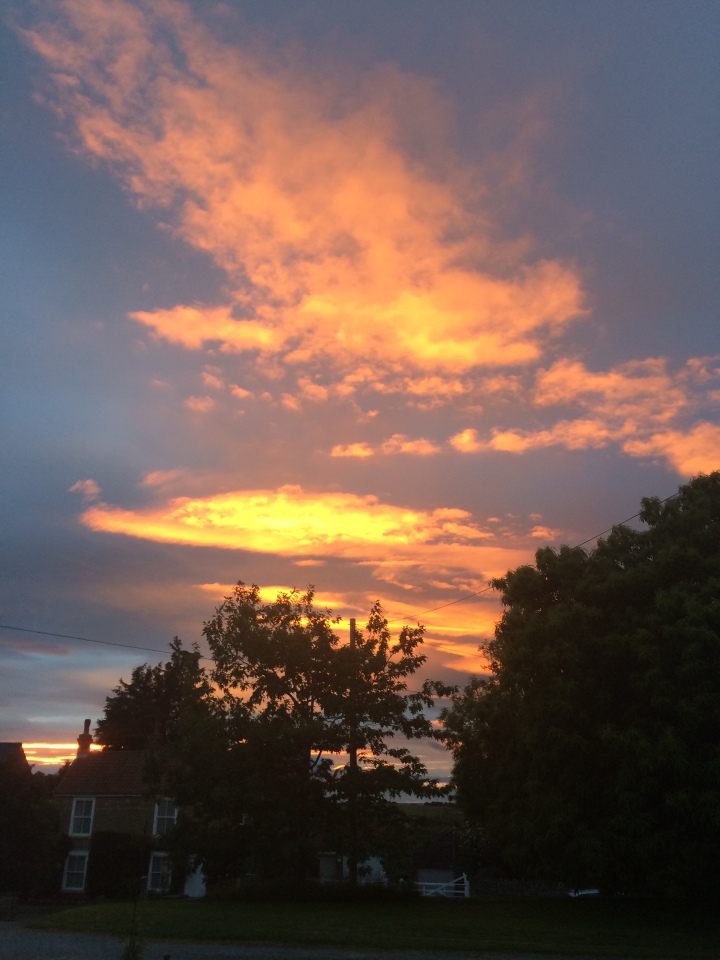 One… what a stunning sunset. Developed without warning and only lasted a few minutes. It’s the sort of sunset that would have made my partner so happy.

You get towards the end of the school year with the once extensive school uniform reserves drained to drought levels. Down to one of each item and they have seen much better days. Sizing is probably about two sizes to small and really they are just a collections of holes held together by a few resilient fibres. Just got to make them last two more weeks. That reminds me – I had better start saving for next terms uniform replenishment. Bet that’s cheap!!!

It maybe only two weeks but you can almost see what’s left of the clothes disintegrating in the air. It’s time for drastic action. It’s time for emergency patching. Unfortunately sewing comes as naturally to me as veganism comes to Donald Trump. I am useless. Always have been, always will be. Up to two years ago that wasn’t a problem. My partner loved darning and out would come the sewing box with such glee. My mum was also an expert in the dark sewing arts. Those days have gone now.

So now it’s down to me. Houston we have a problem. So out came my partners sewing box. A result a couple of useable patches ready to go. How hard can this really be. So a fine looking needle was selected. Several different types of thread to go for. Helpfully each has a number 60, 70, 75, 80 – what the hell does that mean – is it size, age, weight, tensile strength. Let’s go for 60 as it’s black. We then start to put the thread through the needle eye. T***, f***, s***, b******, buggerations. I might as well of been trying to give a cheesed off Honey Badger a haircut. One hour it took me, one hour of my life wasted on that instrument of torture.

Then I started to attach the patch to the trouser knee hole. The sodding thread falls out of the needle. So we start again. Two coffees later we have a needle and thread ready to go again. Now the needle won’t go through the patch. What is it made of – bullet proof armour. Eventually I punch through but with so much force that the needle eye has embedded into my finger. Blood everywhere. After a plaster has been applied I continue. Not once, not twice maybe six times the needle struggles to get through the patch but once through it passes through my finger skin with such ease. In the end my fingers resembles Spongebob Squarepants’s backside. Holes everywhere.

But finally the job is done. The patch is secured and doesn’t look too bad. Quite pleased with that. THEN. Oh for f*** sake, oh come on!!!!

In hindsight it might not have been a great idea to push the needle not only through the front of the trousers but then through the back of the trousers as well. Great work. Now the left trouser leg is completely sewn tight at the knee. What’s the kid supposed to do – hop to school, pirate style.

Don’t think badly of me. After I unpicked the stitching I decided to stick the patch on with superglue. Let’s hope it doesn’t rain.

“Dad its a long time since we had a properly red sunset. I can only remember seeing 3 blood red ones.”

He’s right. We are lucky here. It’s a daft thing to say but we have a big sky here. Not much blocking it out. Well apart from Yorkshire Clag – that’s thick low cloud. When we get a clear sunset they are often stunning but very rarely blood red. 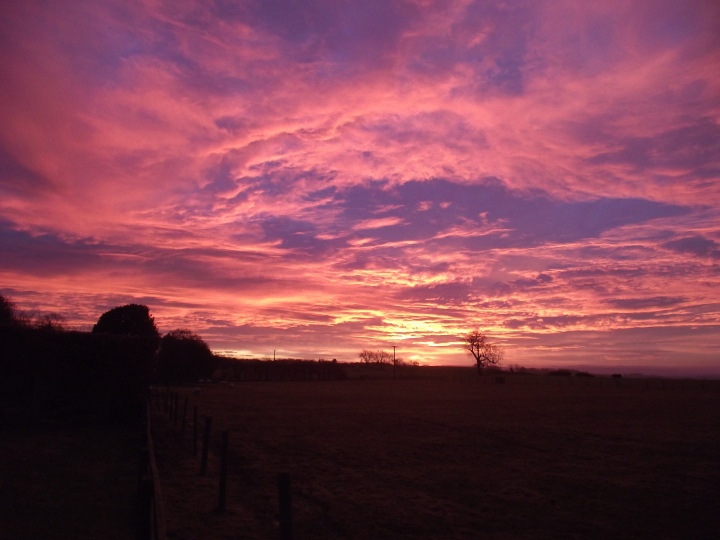 But very occasionally we get one.

“I know that a red sky at night is a fisherman’s delight but I think it might be an omen. At the very least I would hope Dracula or the Hammer Horror movies were born from a blood red night. Just think what a nightmare it would have been if the Dracula or Hound of the Baskerville authors had come up with the idea looking at a sunset but finding that they were dyslexic. The stories may have been lost. How many great ideas have been messed up by not being able to write”

Think of all the great stories that have been made by people with Dyslexia. You just have to find different ways of getting things done. Plus what happened if the Dracula author took one look at the red sky and said ‘That reminds me of a cricket ball I’m going to write about a famous cricketer.”

After a puzzled look. “What about if Stoker. You do know Stoker wrote Dracula. If Stoker had said that reminds me of a blood sucking chipmunk called Alvin. The first book would have been called Alvin Prince of Annoying Singing. That’s when you would have wished Stoker was dyslexic.”

Can’t argue with that. Another thing I can’t complain about it he is now starting to find some humour in some of his greatest fears. That’s a step in the right direction. Now what’s the odds on a blood red sky tonight being serenaded by a signing rodent…

Unfortunately the last few posts have been a tad unfair to a great performer. Picked on him a bit. I do like him a bit really. No not talking about Bono and U2 – not even scratched the surface with them yet. I’m talking about Alvin. I would like to apologise to him and all his brethren. Singing Rodents are welcome here. Not you Bono – you can bugger off…

We sat watching the sun go down the other day.  My partner used to love watching the changing colours in the sky. 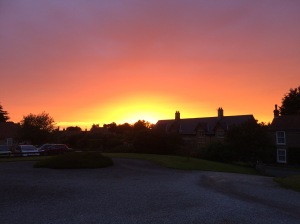 It’s been almost a year since the world changed for my son and I.   Although so young, he appears to be coping reasonably well.  In many ways better than his dad.  He can focus on living for today, while I still drift too often into the past.  He does revisit the past but he prefers to do that in the form of celebrations to mark key dates.  So we fast approach the first anniversary of the world changing.  We have decided to mark the anniversary by visiting one of his mums favourite places.  I’m sure the visit will see tears but hopefully more smiles.  Trying to focus on how fortunate we were to be granted such happy times.

The sky changed to a deep purple and red (the camera didn’t do it justice).  It’s a new memory.  A nice memory that has occurred since the world changed.  It is so important that we keep creating memories.  My son is so right to focus on living today.  I must try to follow his teachings.