It’s Sunday so it’s most be our weekly trip to alpine heaven. A place which has provided so many memories to our family. 2015 was the last visit but one day we will return. Return to Switzerland.

Many of our memories are days spent in the mountains. The Alps are one of the wonders of the world but there is so much more to Switzerland. Memories from city trips have been just as special.

Let’s pick one. A day spent in Lucerne. It’s grand architecture, stunning water setting and a 650 year old covered wooden bridge. Can’t wait to be back there. I really can’t. 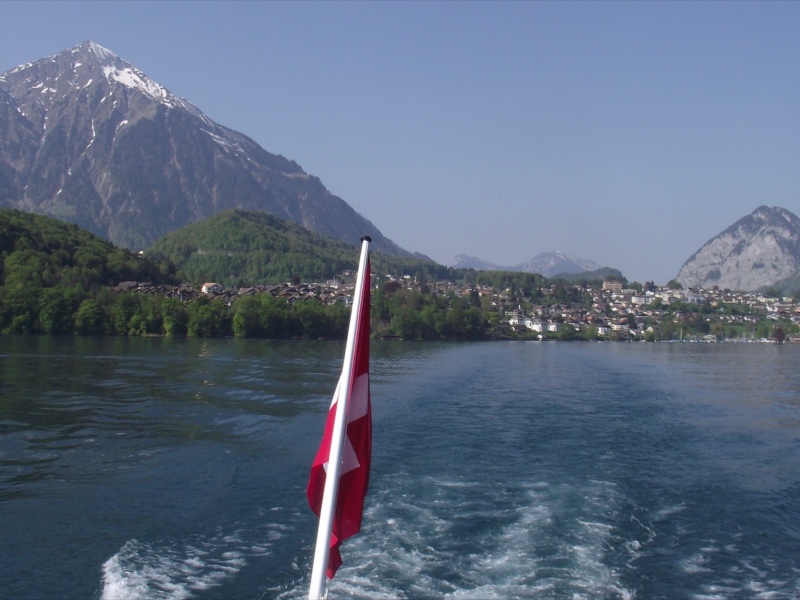 It’s just about Sunday. Surely it’s time to spend a few moments remembering some wonderful family visits to one the best places on our planet. A place of stunning mountain landscapes, peace and wonders. It’s time for Switzerland.

Three generations of family holidays to this little bit of alpine heaven on earth. But now it’s all changed. The family is much smaller and less mobile. That family connection now falls on just Hawklad and me.

So we are going through old photos. Imagining again what it’s like to spend time in Switzerland. The sights, the sounds, the tranquility. We will find a way to make it back. We want to. We need to. It’s now in our family DNA.

In Food Technology today Hawklad was set the task to research how wheat is turned into flour. I was expecting this would set him off about the health aspects of bread. Maybe the additives used.

His line of attack was – flour mills go through all those stages, make all, that effort, spend all that time. This is on top of the months of hard work performed by Mother Nature. So much effort and then a certain muppet Dad can’t even produce a half edible loaf of bread. What was the point….

The other task was to forage and with parents help make some Jam. I remember the last time I tried to make Blackberry Jam. Even after two ceiling repaints I can still see the evidence. That Jam stain has a longer half life than Uranium 235. Plus Hawklad hates Jam.

A rose with thorns. Big ones as well….

Parenting is filled with so many highs but wow does it come with some mightily sharp thorns. One of the peskiest of those thorns being the lack of sleep. As much as you kid yourself, you never seem to catch up with those missed closed eye moments. So far it’s 14 years of sleep deprivation and more to come I suspect.

It’s Sunday morning so it must be time for our weekly trip to one of our planets special places. A place of staggering landscapes and much sort out peace. It’s time for a photo trip to Switzerland.

We went to Switzerland so many times because it feels like a country where adventures are all around you. So much to do and see. Yet all done at a pace which is just slower than the mad rush that plagues modern life.

I so need adventures. I so need to breathe. I so want to go back to Switzerland.

Hawklad has always struggled with his fine motor skills. It is a condition frequently accompanying Aspergers and Autism. With Hawklad this materialises itself in clumsiness, difficulty grasping objects and not being able to ride a bike . But the main issues relate to struggling to use scissors, cut with a knife, using a keyboard and with handwriting. He grasps his pen too tight and the control is very disjointed.

For a few years he received some physiotherapy to help with this but eventually when he hit 13 the service was removed as he was deemed to be above the need threshold. The assessment was carried out by a professional who had no never met Hawklad and was completed within 10 minutes. I had been warned that this would happen as a cost saving measure. The test involved a few random simple ball catches, standing on one leg, a few hops and drawing a line that keeps within an outline. He failed a couple of tests but was asked to repeat until he successfully completed the test. Basically keep going until he passes and then he is above the care threshold. AND guess what the service can be removed.

He has been without support for over a year now. I’ve noticed that he’s starting to increasingly struggle again with some basic grasping skills. So it’s time for trying to do our own DIY fixes. Bouncing and catching balls. Exercises to try and relax his muscles. AND best of all Lego building.

But it’s becoming an increasingly common feeling. Trying to provide support and therapy which surely should be coming from professionals. Certainly not from an unqualified muppet Dad. Sadly I’m not the only untrained parent in this position.

On the daily walk. On the family walk we walk past an old building with a crumbling wall. Everyday nothing to see here. It’s almost like a stepping stone onto the real interesting stuff.

But today look what appeared by the wall.

Just goes to show that you just never know what you might find if you keep looking.

It’s been over 5 years since I sat down in a restaurant….. That’s as rare as a start to the morning like the photograph above. That’s as rare as my football team winning something. Oh hang on the last time that happened was 1969. So hopefully not that rare….😂😂😂

A bit like my so called football team and silverware, the next restaurant trip is not looking particularly imminent. Hawklad isn’t keen. I can’t think of the last time I went with my family to eat out. Maybe a couple of picnics or a garden bbq before the world changed. It’s well over a decade since I went for a meal with a friend. The height of culinary excellence with friends has been limited to the very occasional grabbing a bag of crisps on the way to see my team get beat again. And the other side of the family is understandably very much more distant now.

But here’s the thing. I’m not missing the food. I’m much happier with a bag of chips , sat on a sea wall and fighting off the mad seagulls. I’m not in a mad rush to expand my social circle again. Do you know what I miss about restaurants. That feeling of being grown up every so often. Having to smarten myself up, even combing my hair…. To sit properly. To feel like I’m doing stuff that other people are doing.

That probably makes no sense at all and anyway it’s not happening anytime soon.

It’s no secret that I have fallen out of love with my country. I don’t like what it is becoming. I don’t like the way it’s run. I don’t like the corruption. The inequalities. The new values we are supposed to sign up to. I hate the xenophobic outlook. I constantly seem to be at odds with a sizeable portion of my fellow citizens.

“Dad if we win the lottery can we leave England.”

“England is going down hill. It has been for years. It’s becoming ugly. I’m European but I’m not now allowed to be. I didn’t get a say in that. The country has no future the way it’s going. It’s stuck in the past. Our leaders are racist, law breaking clowns as corrupt as any in our history. I’m ashamed to call myself English now.

I can’t disagree with you sadly. Where might you want to move to.

Switzerland. If they won’t have us then Germany or France or Italy or . I would go to Canada, or America or New Zealand. Anywhere apart from here.

It’s early Sunday morning here in Yorkshire. My thoughts are drifting to another country. A little bit of heaven on earth. To one of the most stunning places on the planet. To Switzerland.

Switzerland is a country that has been close to our family for such a long time now. Many family holidays. At least 4 generations. It’s over 5 years since our last visit. One day we will hopefully return, currently it would just be Hawklad and I. A lot of life has happened over those 5 years.

Why did so many family members spend so many holidays here over the years. This is why.