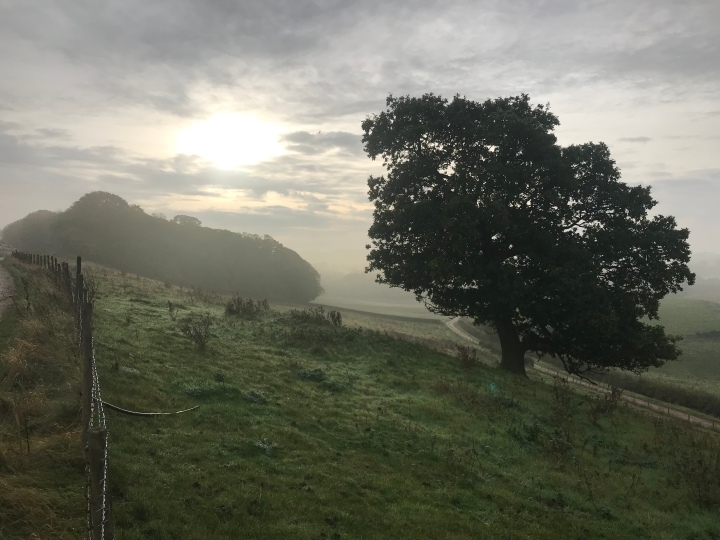 The zero hours contract yielded 5 hours work today. Another 50000000 hours and I might just keep the bank manager from sending me snotty letters. Just enough time left for a quick run. The light was stunning. It’s the quiet before the next storm hits.

“Is it true that we are getting another storm.”

“Yes Son it’s due to hit at the weekend. But this time maybe just a little less wind but much more rain.”

“Great. I bet they have given it a really silly name.”

“Your joking aren’t you.”

“Probably named after Dennis The Menice. Would have been better if they had called it Storm Menice.”

“Given we seem to be getting them every 6 days now maybe they should call it ANOTHER STORM.”

Son gave the car radio a quizzical look when the news reporter mentioned that Boris Johnson is still committed to building a bridge between Scotland and Ireland.

“How much is that going to cost”

“Dad what a stupid idea. How many operations, or school books or trees could that pay for. How many months will it be closed for high winds.”

It’s a staggering idea. A 45km bridge over a seriously mad and volatile sea area. Supported by a series of giant towers having to be spaced at least a kilometre apart to accommodate the busy shipping routes. It would also have to cross the location of the country’s largest military dump. In 1945 over a million tons of munitions and submarines were dumped in a 300m deep sea trench.

“Its ok Son it’s unlikely to be built. When he was Mayor of London Boris committed to another big bridge idea. He was going to build a pedestrian bridge over the Thames. It ended up as a shambles and nothing happened. So if he can’t build a bridge between London and London he’s going to struggle to build one from Scotland to Ireland”.

“Talking about building Dad. When are you going to get round to putting my shelf back up in my bedroom.”

“The project is currently in the planning stages.”

“If you mean by planning that it’s been propped against the wardrobe them then planning stage has lasted almost two years.”

“I will try to do it tomorrow.”