Welcome to Britain. A green and pleasant land.

A country where this man has just won a massive majority. A man who continues to cover up his repeated cockups which has led to a British Citizen bring help in Iran since 2016. Now his focus is on trade deals and turning the country into a trumped up lap dog. Sadly the poor British Citizen can’t offer a trade deal so she is stuffed.

Where this man from our Government claims that he has more common sense than those who died in the Grenfell Tower Disaster. He has made millions from his hedge fund company on the back of Brexit. 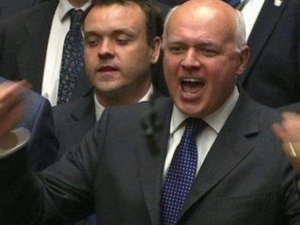 And a country where this man has just been awarded a knighthood. A man who introduced sweeping and brutal benefit reforms which has led to unprecedented levels of misery and is probably responsible for the deaths of hundreds who lost benefits.

Britain a green and pleasant land.

*** the photos of these lovely human beings are from The Guardian, Inside Croydon, Yorkshire Post, Change.org

36 thoughts on “Green and pleasant land.”