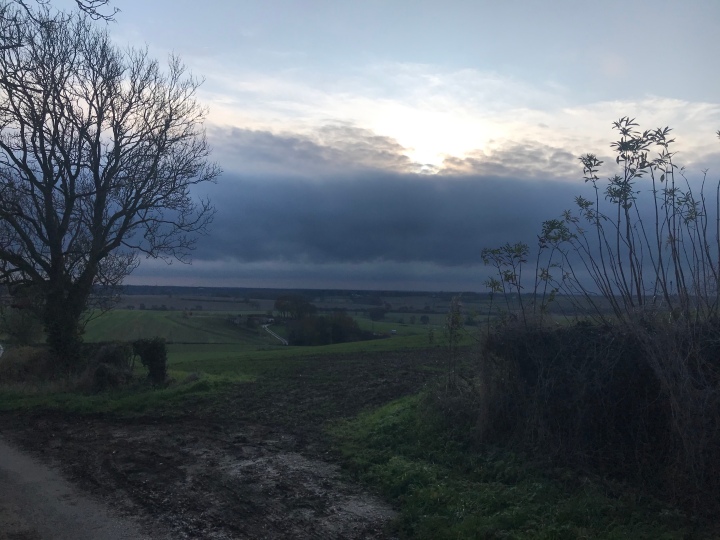 The sun so tantalisingly close but no cigar. That’s as close as it came to beach weather here in Yorkshire today. When I say beach weather that is in terms of Walruses.

The picture is perfect for my mood today.

Trying to be a ray of sunshine but not quiet achieving it. After the stress of the last few days I was aiming to have a nice day. At home sorting out the works payroll run while listening to a fine collection of relaxing music. Not forgetting to fit in a run around a slightly extended lunch break. Well that was the plan.

Unfortunately as I was heading for bed at 1am I noticed son had lost a button on his school jacket. That’s a School negative and would send him into meltdown again. So the half asleep Dad with the sewing abilities of a drunk Penguin spent most of the night basically sewing various fingers onto the front of the said jacket. How difficult can this really be. As a guide it took me 40 minutes and three hot drinks to just thread the needle. At one stage I must have dozed off as I managed to head-but the sewing box. Eventually I made bed at just after 4am with a pretty decent sewing job completed. Unfortunately now I was wide awake and sleep passed me by for another night.

Relaxation and no sleep are not a great combination. Especially when the old CD player annoyingly developed a jump while playing my favourite cds. Thankfully I made it to my run. An almost enjoyable run until my sleep deprivation led me literally down the wrong path. Normally the right one but since the last floods – not a great one. The ground was becoming increasingly squelchy until I came to the large beck. Normally a nice wooden bridge joins both sides of the path. Unfortunately the bridge collapsed months ago and is currently heading towards the North Sea. So two choices do a u-turn which will add another hour to the run or jump the beck. The need to restart work ASAP dictated the mad option. I guess I can just about jump the beck – it’s only about 6 feet. I hit the long jump perfectly and unbelievably sailed clear over the beck. My moment of triumph was short lived. As quick as my considerable momentum tried to take me forward my left foot tried to sink into the mud. Then the dreaded muddy suction sound and a foot reluctant to come out for air. Something had to give. My foot released unfortunately my shoe didn’t. Hoping around on one leg while trying to prize the missing trainer from its muddy grave. Unfortunately gravity always wins and my exposed white sock sunk into the mud. When the trainer was rescued it was full of thick cold mud. Lovely running in that for the final 2 miles. At least my left foot got a free mud bath.

But here’s the rub. To take my mind off the mud drenched foot I replayed memories in my head. Happy memories of my partner. Passing one particular farm field I was taken back about 16 years. A late sunny evening walk. Maybe one too many wines. Then trying to make snow angels in that fields wheat crop. Completely forgot that one. It’s such a treat when you discover keys to long lost memory doors.

The mood darkened a bit on news that son has to revise for two tests on Monday morning AND spelling tests will now happen every week. Deep joy. So yes it’s been a day which could have been really uplifting but never quite managed to shake off the dark clouds. Maybe tomorrow the sun will shine.